With the dwindling number of bookshops on the high street, a market dominated by ‘big players’ such as Waterstones and the increasing power of Amazon and its Kindle, smaller publishers have had to work hard to be recognised. It’s a continuous battle to stay afloat but the creativity of some of those in the independent sector has been astonishing with a number of titles appearing on the shortlists of some of the most prestigious literary awards. One such novel was the Booker shortlisted ‘Swimming Home’ by Deborah Levy another in the running for The Guardian’s ‘First Novel Award’, Villalobos’s ‘Down the Rabbit Hole’ while even this week, Helen DeWitt’s ‘Lightning Rods’ has been shortlisted for the Bollinger Everyman Wodehouse Prize for Comic Fiction. Both of these were published by ‘And Other Stories’, a publisher rapidly making a name for itself, bringing some excellent writers to the attention of the British public through a creative selling strategy. Through subscribing to ‘And Other Stories’ for a year, you receive copies of the books they publish and can even have a hand in what they publish in the future. In the past few months I’ve bought a gift subscription for two friends who’ve been delighted with the texts that have come their way.

‘Open Door’ by Iosi Havilio is one of those ‘other stories’ ignored by a publishing industry unwilling to take risks perhaps. Set in Argentina and translated from the original Spanish by Beth Fowler, the title comes from the rural community where much of the novel is set. The main character, an unnamed veterinary assistant from Buenos Aires who also tells the story, is sent there to assess a horse and it is where she returns when her partner disappears (an idea loaded with meaning in Argentina) and her life begins to unravel. She finds solace at first in Jaime, whose horse she assessed as the novel began, and then in Eloísa, a local teenager. But ‘Open Door’ is also the name of the local psychiatric hospital, an establishment in which most of the ‘inmates’ are given the ‘illusion of absolute liberty’. Interestingly, the hospital always remains at the edges of the characters’ lives, or so it seems. 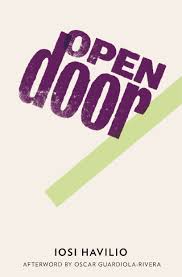 As the novel about detachment, identity and reality develops, the main character’s inertia and loneliness is broken to travel back to the city to identify bodies which might possibly be her missing lover. During those visit she becomes friendly with Yasky, the official who organises her return. Yasky also has an identical twin who is an ‘inmate’ at ‘Open Door’ but again these details remain at the novel’s edges. Even though Jaime works there, we hardly ever see him at his workplace; we never properly meet anyone who is treated there. Yet, with Havilio giving this title to his work, there is a sense that it is actually at the very heart of the novel. The realism of the events is, as the novel progresses, questioned by the reader as the narrative voice becomes less reliable.

The narrative voice is beautifully controlled by Havilio. Although much of it is written in the past tense, the author often moves to the present. This gives the story being told immediacy and an energy which draws you in but also subtly hints at the off-key nature of the events and the protagonist. There is an astonishing piece of writing near the start of the novel as the narrator watches a suicide attempt from a nearby bridge. The use of the present tense and the description creates the tension while we also share the other tension of being an uncomfortable but willing voyeur in the event.  Yet, even as this chapter ends it is as if it hasn’t really happened and the whole novel has the feeling of a dream rather than reality.

The quality of writing from that chapter isn’t always sustained perhaps, particularly in some of the more sexually explicit scenes at the end of the novel. However, the narrator and her mostly detached, flat observations suggest that below the everyday there lies a great deal of disturbance. This is increasingly felt as the novel continues but is hidden deftly so that at the end there are more questions than answers. And that is a sign of a master storyteller in itself. Is ‘Open Door’ suggesting that the narrator finds liberty as she ‘suddenly understood everything: the precision of chance, the cosmic, the inevitable’? Or is it that the characters themselves, and we as readers perhaps, are in reality the ‘free’ inmates of the institution, ‘Open Door’? At one point, Eloísa turns to the narrator and questions her relationship with Jaime, a much older man, “It’s madness. If I didn’t know you better I’d say you were wrong in the head.”  But, much like the rest of the novel, these details are passed over and are left hanging in the air.

I enjoyed this novel and was glad to read something that played with voice and form but also engaged the reader rather than being a vehicle for a clever writer. Havilio is a clever writer but he doesn’t forget that, first and foremost, good writing must be readable and enjoyable. This novel is both.

‘Open Door’ by Iosi Havilio is published by ‘And Other Stories’.

You can find out more details about the publisher and subscribe to ‘And Other Stories’ at http://www.andotherstories.org/subscribe/

This entry was posted in Fiction, review and tagged 'And Other Stories', 'Open Door', fiction, Iosi Havilio, novel, review. Bookmark the permalink.